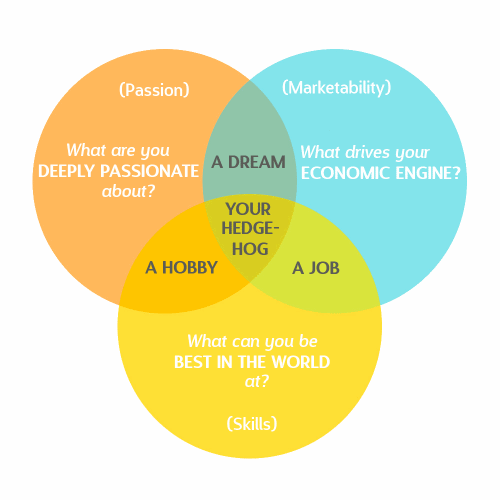 Greek poet Archilochus once said, “The fox knows many things, but the hedgehog knows one big thing”. The fox, considered as cunning animal, can think of many solutions and is always devising different strategies to attack the hedgehog. On the other hand, the hedgehog does one thing really well is to roll up into a perfectly formed spiky ball when under attack, and he does that over and over, never even tempted to change his tactic. And mind you, every time it works against all kinds of predators.  Hedgehogs are slow and less smart compared to foxes. But, they simplify the world around them and focus on a single, coherent vision.

Jim Collins, in his book ‘Good to Great’, described the similarities between successful big corporates and the Hedgehog Concept. Collins suggested companies to focus on single virtue to beat their competitors and to achieve greatness. There are three key components to a “Hedgehog Concept”:

The intersection of these three answers is your Hedgehog – the one thing that is your core and the one thing you should focus on. The ‘Hedgehog Concept’ is the idea that your company should narrow down what you are really good at and do it better than anyone else can. Simply put, do what you do and do it well. Whether this is a right business advice for mature corporate companies is debatable. But when it comes to startups, it makes a lot of sense.

Startups, with limited access to resources, need to do one thing really well to survive and succeed. But finding that one thing is extremely difficult as it requires absolute clarity and laser-sharp focus. But if you ask yourself those three questions, you can find your “hedgehog”. Mind you, you can play around with other ideas only after you get a critical mass of customers. You can then find ways to provide value outside of the initial premise, and that’s when you start to play the part of a fox. According to Collins, it takes an average four years to fine-tune the Hedgehog Concept. So, if we go by this rule, then you should focus on only one think for at least first three to four years. I am not sure if it’s by design or by accident, but both Amazon and Google followed Collins advise. Amazon started in 1995 as a bookseller and then added other product categories like toys, electronics, video games, software, etc. in 1999. Even Google, started in 1998 as Search Engine, and then launched Google News in 2002, Gmail in 2004, Google Maps in 2005, Google Chrome in 2008 and so on. Both – Amazon & Google – added additional set of services exactly after 4 years!

As Jim Franklin, Former CEO of SendGrid, said, “Doing one thing well is hard. I like to think that you’ll need about 50 people, 5 million bucks and three years to do one thing well. If you have less than that, you will really have to be focused – you don’t have a lot of room for error.” So, in the early days of any venture, the most likely way for your startup to succeed is to focus on one thing and try to solve that one problem. You should invest all the time it takes to make that idea really work. That’s why finding your thing – your hedgehog – is great startup advice. If ever the phrase “less is more” applied for startups, it’s here.

In fact, Ikigai, a Japanese concept meaning “a reason for being”, is quite similar to the “Hedgehog Concept” and can be used by startup founders to find their “reason for being”. More on that, some other time…